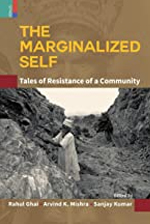 Marginalized Self: Tales of resistance of a Community
Edited by Rahul Ghai, Arvind K. Mishra , and Sanjay Kumar

The marginalized self questions The century-old perception of the Musahar community as rat-eating, pig-rearing, habitually drunk, lazy and unmotivated; a perception fostered by the dominant discourse of development, and the historically prevalent hierarchical social system. This collection of essays argues that these victims of the dominant model of development acquire a different kind of power and critical consciousness due to their marginality, which helps them to examine the processes, practices, and institutions that give rise to and justify poverty, displacement, corruption, greed, competition, and violence in the name of development. Ethnographic studies focussing on the Musahar have demonstrated that the people of this community are capable of offering resistance to the might of the development regime in terms of a comparative critique of modern civilization.They can assert the value of their own world view and epistemology, and in doing so, they subvert the superiority that is generally assigned to the logical and formal schema in understanding the world, and which often speaks in contradictory, evasive, ambiguous, and metaphorical terms. The book offers insights into marginality, culture, and development in India, and will be of interest to students, scholars, practitioners and policy-makers associated with the disciplines of development studies, social Work, social anthropology, critical social psychology, history, and public policy.

Rahul Ghai is Associate Professor, School of Development Studies, IIHMR University, Jaipur. His broad areas of work are understanding marginality and human well-being in a transforming India. Arvind Kumar Mishra is Assistant Professor, Zakir Husain Centre for Educational Studies, JNU, New Delhi. His prime interest is in social psychology, marginality and alternative development. Sanjay Kumar is a researcher, development practitioner and founder of the Deshkal Society, Delhi. He specializes in apprehending marginality, change and development of oppressed and marginalized communities in India